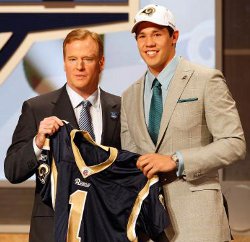 Academics:
Honor student in finance. Second-team Academic All-American in 2008. Academic All-Big 12 in 2007 and 2008. Left school with a year of eligibility remaining, having redshirted in 2006.
Injuries:

2009:
Third-degree AC joint sprain (right shoulder) in first game of season. Missed three games. Played one game and a quarter of the Texas game before re-injuring the shoulder. Had surgery and missed the last six games of the season and the bowl game. Sat out the NFL Combine with the injury but appeared fully healed at his pro day about a month later.

2008:
Tore ligaments in his non-throwing hand early in the final regular season game but played all of it, the conference championship game and the “national championship” game. Had surgery on the hand in between the two postseason games.

2007:
Missed part of Texas Tech game due to a concussion. Played the next week.

NFL Combine Stats:
Did not participate in any drills at the Combine due to shoulder injury. Scored 36 on the Wonderlic.

Positives
Deadly accuracy at all distances, as good as any QB drafted since Philip Rivers. Places throws in tight spaces and puts the ball on the numbers. Anticipates routes well. Accurate on fade passes. Strong enough arm to succeed in the NFL. Decisive with a quick release. Almost always throws a tight spiral. Willing to hang in the pocket, but has nimble feet and can create room for himself when he has to. Solid footwork and balanced in drops. Good play-action fake and strong pump fake. Stays square and throws on target while moving in either direction. Makes good decisions and takes care of the ball. Intelligent, high-character player well-respected on and off the field. Quiet leader by example with an excellent work ethic.

Negatives
Durability is a major question. Bad feel for backside pressure and identifying late blitzers helped get him injured last season. Can go through progressions or look off safety, and understands hot reads and where defense is vulnerable, but his coaches made his reads for him and he relied heavily on his primary read or quick screens. Played predominantly from shotgun formation and will have to adjust to working from under center. NFL corners may be able to jump his deep outs. Inconsistent trajectory on fade passes. Arm isn’t a cannon. Throws from three-quarter slot at times (Google him at images.google.com; you’ll see this a LOT). Not a scrambler or an elusive runner. Needs to learn to brace for impact better when hit. Not a vocal-enough leader. “Could very easily emerge as a successful starter in the NFL but there are also several ominous warning signs that indicate a considerable bust factor.” (Scott Wright)

Fun Facts:
Bradford is the first Native American to win the Heisman. He is one-sixteenth Cherokee and an official citizen of the Cherokee Nation. He played on his high school basketball and golf teams and is also a big hockey fan. He has also rung the opening bell at the New York Stock Exchange, after winning the Heisman in 2008. He reads the story of David and Goliath before every game.

RamView:
For better or worse, this will be a day Rams Nation will always remember. Bradford isn’t the best player in this year’s draft, but he’s close, and he’s the best QB. Given that the Rams gutted the position in the offseason all the way down to A.J. Are-You-Freaking-Serious Feeley and Keith Null, a QB is a must-have. We tell our teams to go big or go home a lot. The Rams are definitely doing that. Bradford’s an accomplished player with a good arm and a good head on his shoulders. He will pay off if he can learn the job quickly and stay on the field. Thumbs slightly up.