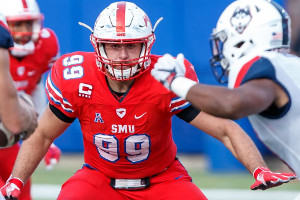 While only ranked as a two-star prospect from Texas, Lawler's first-team all-state selection (124 tackles, 28 tackles for loss, 13 sacks; 44 catches, 719 yards, 11 touchdowns receiving) portended a good career at SMU. The former high school powerlifter was ready to play right away, earning time in all 12 games as a true freshman (23 tackles) and getting some time on offense (three-yard touchdown, two-point conversion). Lawler earned the starting job as a sophomore, lining up for every game and leading the Mustangs with 64 tackles, nine for loss while compiling five sacks. His break-out season came in 2016, garnering first-team All-American Athletic Conference accolades, racking up 65 stops and leading the team with 15 tackles for loss and six sacks. Lawler received first-team all-conference recognition as a senior, as well, racking up 74 tackles, 15.5 for loss, 9.5 sacks, two forced fumbles, and three blocked kicks for the Mustangs.
Overview
Highly productive three-year starter who has used his strength and motor to whip inferior competition across from him in the American Conference. Lawler doesn't have enough size to fit into an odd front and he lacks athletic rush traits teams want from 4-3 defensive ends. Lawler's football character and production will get him a look, but he may lack the physical talent and athletic ability to last in the league.
Strengths
Weaknesses
Lance Zierlin (NFL.COM)