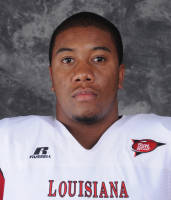 2008 (Junior): Started all 12 games at defensive end…Finished second among defensive lineman in tackles and tackles-for-loss and led the defensive line in sacks…Forced a fumble vs. FIU…Posted a season-best five tackles, all solos, vs. ASU, including two tackles for loss and a sack…Also had sacks in games at Illinois, vs. Kent State and at ULM.
2007 (Sophomore): Appeared in all 12 games at defensive end…Had a season-best three tackles in the season-opener at SC…Posted a tackle-for-loss at ASU and shared a tackle-for-loss vs. ULM.

2006 (Redshirt Freshman): Played in all 12 games on the defensive line, starting the first two games…Assisted on a tackle at LSU and Troy.

2005 (Freshman): Played 13 snaps at Eastern Michigan, assisting on one tackle, before missing the remainder of the season with an ankle injury…Granted a medical hardship for the season.

University: An All-District 8-2A selection with 20 receptions at wide receiver in addition to playing defensive end and safety…Finished his senior season with 10 quarterback sacks and over 100 tackles.